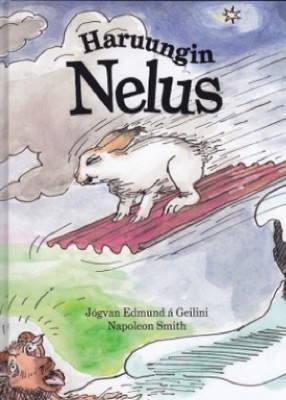 Nelus lives in a deep hare burrow just under Malarbrúgv on Keldufjall mountain in Svínoy. When the weather is good, all the leverets hop out to play.

Old granddad hare also lives in the burrow. And, like most granddads, he loves to tell stories about the old days. Granddad hare is so ancient that he even remembers when there was a war in the Faroe Islands!

One winter’s day Nelus finds a roof slate in the snow, which he immediately tries to use as a sleigh. But it is not easy to steer a roof slate and Nelus gets stuck in the snow. Fortunately, Little Brother and Little Sister come to the rescue.

This story is so exciting and fast-paced that children will listen with baited breath.

The illustrator has covered the book in intricate drawings teeming with cute little animals, houses, people and nature as the backdrop. He has even included a map of all the places in the Northern Islands where the story unfolds. At the back of the book you will also find fun facts about hares, which have inhabited the Faroe Islands since the mid 18th century.